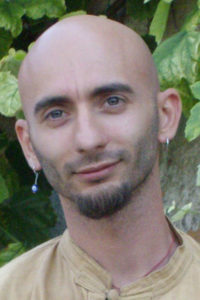 Classical, jazz and popular musician, he studied bassoon and music theory at the Giuseppe Verdi Conservatory in Turin. At the age of 15 he began a jazz drums and later Middle Eastern and Brazilian percussions.

He attended singing courses at the Turin jazz center and the CSM school, as well as seminars on functional methods for using the voice (Gisela Rohmert).

He plays in various projects and in different fields working with theater, dance and contemporary circus and is the founder of Libera Officina Ritmica, an educational and performative project that brings together Brazilian, Arabic and African percussion.

His interest in spiritual research led him to practice meditation and follow paths of growth and alternative care such as Reiki or Martin Broffman’s body mirror system and to approach Eastern philosophies and shamanism. He has collaborated with the Oriental Dance Association “Arabesque” which deals with training non-conscious / visually impaired and breast cancer women, with the naturopath Mara Chiapponi in the EtnoBioMove eAcquaBioMove method and as a martial arts instructor with people with psychophysical deficits.

He completed the Windhorse training course on basic attendance and completed the MBSR mindfullness protocol. Member of Accordo since 2018, he currently collaborate with Accordo as a Basic Attender and in secretarial work.

This website uses cookies to improve your experience while you navigate through the website. Out of these, the cookies that are categorized as necessary are stored on your browser as they are essential for the working of basic functionalities of the website. We also use third-party cookies that help us analyze and understand how you use this website. These cookies will be stored in your browser only with your consent. You also have the option to opt-out of these cookies. But opting out of some of these cookies may affect your browsing experience.
Necessary Always Enabled
Necessary cookies are absolutely essential for the website to function properly. This category only includes cookies that ensures basic functionalities and security features of the website. These cookies do not store any personal information.
Non-necessary
Any cookies that may not be particularly necessary for the website to function and is used specifically to collect user personal data via analytics, ads, other embedded contents are termed as non-necessary cookies. It is mandatory to procure user consent prior to running these cookies on your website.
SAVE & ACCEPT