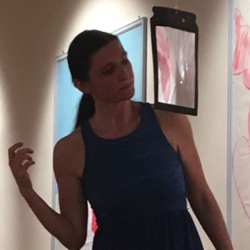 Ambra Gatto Bergamasco is formed in the artistic field with the renowned artists Ulla Alasjarvi and Beppe Bergamasco from birth participating from a very young age in their experimental theater works in the 80s and 90s. Theatrically it is formed with techniques of physical theater. He works with actors of Peter Brook as the renowned Indian dancer and actress Mallika Sarabhai with whom she collaborates in India and Italy. He trained with Japanese and European Butoh dancers from 1998. Founder and director together with Edegar Starke and Enrico Pastrore of the Moving Bodies Festival – Butoh e Performance Art, a festival held between Dublin and Turin. After twenty years of academic and artistic life spent in Dublin, Ireland, he returned to Turin to artistically direct the Espace theater and the Moving Bodies Festival activities.
Degree and Master in Cultural Anthropology and Doctorate in Cultural and Urban Geography from the University of Maynooth in Ireland. As a holistic operator in Dublin, she studies the practice of Reiki in the hospital and medical situations, opens the clinic ‘Reiki Moves’ where it offers treatments of Reiki Master and Shamanic Practices (diploma with Shamanism Ireland) with particular attention to the recovery paths of the parts existing in every human being that have been osucurate, overshadowed by the events of life lived, post-traumatic integration, relaxation, increase in well-being daily.